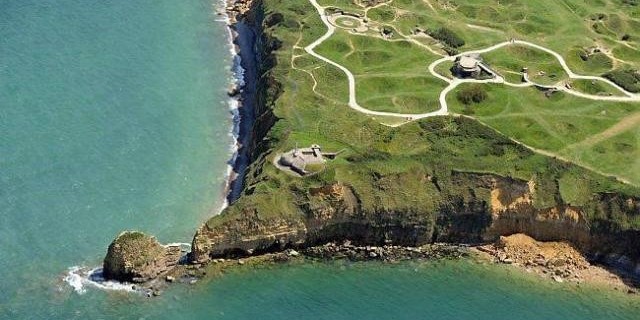 By 1942, the Germans had set up a battery of 6 guns on the top of 100 foot high limestone cliffs at the headland named the “Pointe du Hoc”. This battery was situated between the two US landing beaches and the range of the 155mm guns would allow the Germans to fire on both Utah and Omaha. These guns had to be neutralized before the beaches could be assaulted. Despite 1500 tons of bombs dropped on this site by Allied aeroplanes prior to D-day, it was decided to attack this long range gun battery with infantry.

The battery was so well defended from inland that the assault would have to be undertaken from the sea. This meant that the attackers would have to climb the cliff first, a mission for the US Rangers, the new elite troops of the US army.
The mission of companies D, E and F of the 2nd Ranger Battalion was to land at 6.30AM at the bottom of the cliff. If they scaled the cliff within the first half an hour and could send a signal from the top by 7AM they could then be reinforced- otherwise they were on their own. The plan was to silence the guns using thermite grenades, then gain control of the road half a mile inland where they would be reinforced by the troops arriving from Omaha beach.
Due to an error of navigation, the first wave did not land at the bottom of the Point du Hoc until 7.10AM. They managed to scale the cliffs rapidly, and then found out the gun emplacements were only filled with decoys, disguised telephone poles. They moved inland where the Rangers managed to gain control the road, and during this Sergeant Lommel found real the guns that had been hidden in a nearby field. Quickly destroying the guns, the Rangers then settled in to wait for the relief force due to arrive from Omaha Beach at any moment.
Although the Rangers were not relieved until the 8th of June, Colonel Rudder’s tiny force managed to retain control of the position for these 48 crucial hours. During these grueling days the Assault 3 companies suffered over 60% casualties.

What to see now: A very impressive site with most of the craters from the air and naval bombardments still remaining to be seen.