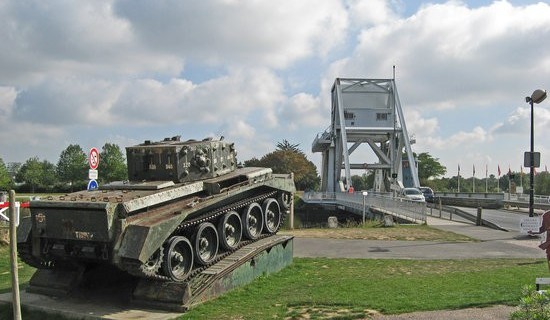 to blow up five bridges on the river Dives thus turning the river into a natural antitank ditch (A German tank attack was considered by the Alliesto be the biggest threat),

to silence the long range guns of the Merville Franceville battery situated on the eastern side of the Orne river estuary,

to control the high ground north of the city of Caen, the liberation of the city itself also considered to be one of the Allies highest priorities on D-Day.

These British and Dominion paratroopers were to be dropped east of the Orne river and the nearby canal in the early hours of the morning of June 6th. All the seaborne landings of D-day would take place west of the river. Thus the very first operation for the British paratroopers on D-Day was to seize intact the bridges across the river Orne and the nearby canal, as they would be needed to ensure the reinforcement and the resupply of the Airborne troops.
Allied intelligence had provided information that the Germans had installed explosives on the briges in order to ensure that they would not fall into Allied hands intact in the case of an attack. The paratroopers of the Oxfordshire and Buckinghamshire Regiment had trained hard to make a sudden attack and seize these bridges while the German defenders were still surprised. For this only gliders would be accurate enough to land all the men at the same time and place. The British designed Horsa gliders which were made of wood managed to reach the bridges with an accuracy and precision that is still impressive even when measured by todays advanced navigation standards, the closest landing only 147 feet (45 meters) from the bridge.
The men, lead by Major John Howard successfully seized their targets intact and were reinforced by other paratroopers from the 6th Airborne as the morning wore on. The first seaborne troops to cross the bridges would arrive around noon with No 4 Commando under Lord Lovat, piped across the river by Lovat’s piper Bill Millin.
The Merville Franceville battery was to be attacked by Colonel Otway who was dropped with over seven hundred men of his Battalion around 1AM. However, once on the ground Otway could only gather about one hundred and fifty of his men. With little equipment and forced to use an improvised plan Colonel Otway and his men still managed to assault the battery and silence the guns on time.
The bridges on the Orne river and on the nearby canal were renamed by the paratroopers on the following day. They are still known today by the names the paratroopers gave them: Horsa and Pegasus bridges..