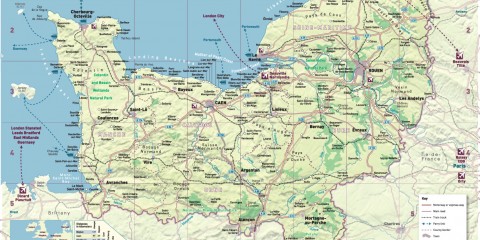 Normandy was created in 911 by a treaty between the king of France Charles the simple and a Viking chief named Rollo. This new settlers would protect Paris and the Seine river.
After the Viking destructions, their heirs covered Normandy with many abbeys and castles. William the conqueror, the seventh duke of Normandy was the last one that managed to invade England. The Bayeux Tapestry, an artwork from the 11th Century is a remaining witness of this golden era.
With 400km of Coast, it is France second largest fishing region.
Its Eastern end starts just 40 miles West of Paris, the most famous village on this side being Giverny. Normandy has a very large panel of landscapes. The loops of the Seine river in the limestone ground and the cliffs of Etretat benefit from a specific light that inspired so many painters.
The Western has less forest and a granite ground. As all the houses used to be made thanks to local materials, the architecture varies a lot. The most visited site of Normandy is the Mont Saint Michel.