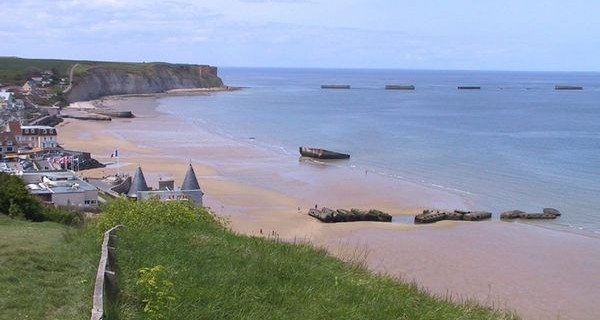 Sword Beach was situated on the eastern side of the beachhead on D-day.
This beach, overlooking the western side of the Orne estuary was to be assaulted by the British 3rd infantry division, its main task being the liberation of the strategically important city of Caen on D-day.

This sector was mostly defended by the 736th Grenadier Regiment, a low quality German Unit in static Coastal defense which will soon be strengthened by the 21st Panzer Regiment…

What to see nowadays
There are very few bunkers remaining. The coast along the Orne river estuary being a resort area since the 19th century, most of the German defenses and bunkers were removed shortly after the war.
But there are still a few to be seen (machine gun nests, pillboxes,..), the most impressive being a five story Command Post which has since become a museum dedicated to the building and breaching of the Atlantic wall.

16 commonwealth cemeteries are widespread in Normandy following the itinerary and main battlefields of the liberation troops.